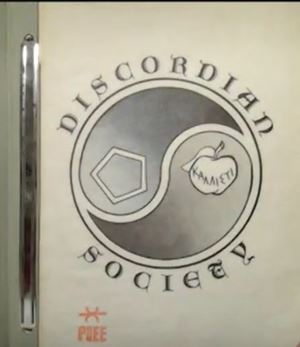 1957 or 1958 - Discordianism is founded by Kerry Thornley and Greg Hill.
1959 - Kerry Thornley and Lee Harvey Oswald meet in the Marines. Kerry begins to write a fictionalised account of his time in the core called The Idle Warriors, basing one of his characters on Oswald. That same year, Oswald defects to Russia.
1961 - Greg Hill and Kerry Thornley move in together in New Orleans. They also meet soon-to-be-Discordians Slim Brooks and 'Brother-in-Law.'
1963 - Assassination of JFK (ostensibly) at the hands of Lee Harvey Oswald. Before the assassination Barbara Reid allegedly sees Oswald and Kerry Thornley together.
1964 - Kerry testifies at the Warren Comission.
1965 - Publication of the Principia Discordia, first edition. This is commonly claimed to have been produced on Jim Garrison's photocopier, but that seems to be a twisting of the truth.
1965 - Kerry Thornley's book Oswald - a curiosity in that it accepts the claims of the Warren Comission - also published by New Classics House. Later that year, Kerry Thornley marries Cara Leach.
1965 - Principia Discordia or How The West Was Lost second edition is published.
1968 - Kerry Thornley is subpoenaed as part of Jim Garrison's investigation into the death of JFK, January.
1968 - Greg Hill is discharged from the Army.
1969 - Birth of Kerry's son Kreg.
1969 - Greg Hill founds the Joshua Norton cabal.
1969 - Robert Anton Wilson and Robert Shea publish (under false or no names) articles in TeenSet Magazine and The Roger Spark, that they will later quote as supporting evidence in their epic work Illuminatus! 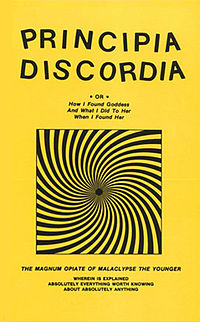 1970 - 4th (and 5th) edition of the Principia Discordia released by Ripoff Press.
1970 - Perjury charges from Garrison's investigation are dropped against Kerry.
1971 - Kerry and Cara separate.
1973 - Robert Anton Wilson receives communications that he attributes to various possible sources, including a Pookah and the 'dogstar' Sirius, July 23.
1973 - Kerry Thornley begins to 'regain' memories about Brother-in-Law and starts to conclude that he was in fact connected to the Kennedy conspiracy.
1973 - Robert Anton Wilson releases the work, The Sex Magicians.
1975- Robert Anton Wilson and Bob Shea release Illuminatus!, a trilogy featuring Discoridans as characters.
1976 - Revisionist Press edition of Principia Discordia - a red hardcover - is released.
1976 - The Illuminatus! play, directed by Ken Campbell premiers. Sets are built and designed by Bill Drummond, who works with Ken's words "Is it heroic?" painted on the wall of his workshop, November 28.
1977 - Zen without Zen Masters is released by Discordian and Principia Discordia contributor Camden Benares, by And/or Press. Robert Anton Wilson contributes commentary.
1977 - The Illuminatus! play is performed in London's Cottesloe Theatre.
1978 - Robert Anton Wilson releases Cosmic Trigger 1: The Final Secret of the Illuminati.
1978 - H.R Geiger, of Alien fame, creates an artwork titled Illuminatus, which includes references to Wilson and Shea's book, as well as the faces of Timothy Leary and HR Geiger.
1979 - The most famous edition of the Principia Discordia, the 'yellow cover edition' is published by Loompanics. This features an introduction by Robert Anton Wilson, and an 'outro' by Greg Hill. Documents sent between Hill and Michael Hoy of Loompanics indicate that this may be the first legal example of Copyleft.

1983 - Robert Anton Wilson releases his book Quantumn Psychology.
1985 - Jimmy Cauty and Bill Drummond meet.
1987 - Jimmy Cauty and Bill Drummond form the band 'The Justified Ancients of Mu Mu', named after the figures from the Illuminatus! trilogy, on January 1. They conceal their identities, appearing as Kingboy D and Rockman Rock, but are soon exposed. They release the single 'All you need is Love' on March 9, and their first LP 'What the Fuck is Going on' in June. Due to legal trouble from ABBA, remaining copies are burned in a field in September.
1988 - Karl Koch, a young German hacker who has named himself Hagbard Celine after the character from Illuminatus! is caught, along with others, by German police, selling hacked documents to the KGB.
1988 - Jimmy Cauty and Bill Drummond send out several more releases, under various guises including the album Who Killed the JAMs as The Justified Ancients of Mu Mu, and several singles as The KLF. They also release a track - Doctoring the Tardis - under the name The Timelords, claiming it was written by 'Ford Timelord'; Jimmy's car.
1989 - In circumstances unusual enough to warrant a great deal of speculation and mumblings of conspiracy, Karl Koch [Hagbard Celine] is found dead in a field, after having straightened his life out. 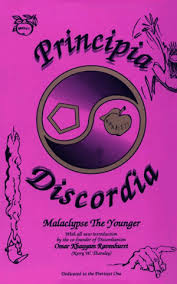 1990 - The KLF release the album 'Chill Out'.
1991 - With the help of, and an introduction by Kerry Thornley, Illuminet Press releases the 'purple cover' Principia Discordia. They also release Thornley's previous self-published work Zenarchy.
1991 - The KLF release the album 'The White Room'.
1992 - The KLF follow up a strange performance at the Brit Awards of their techno hit '3 AM Eternal' featuring Extreme Noise Terror and Bill Drummond shooting machine gun blanks into the audience, with the announcement that they are leaving the music industry. They dump a dead sheep at the afterparty with a label reading 'I died for ewe.' A full page advert on the back page of NME verifies that this is the end.
1992 - Pete Robinson releases his book Justified and Ancient History: The Unfolding Story of the KLF.
1992 - Kerry Thornley meets with Oliver Stone to talk, as Stone prepares for his film JFK. Thornley also features in a story from A Current Affair, partially organised by Sondra London.
1993 - A full page advert in NME reveals Bill Drummond and Jimmy Cauty's art organisation 'The K Foundation.'
1994 - Steve Jackson Games releases the 'black cover' edition of the Principia Discordia.
1994 - August 23, the KLF burn 1 million pounds in cash of the small island of Jura.
1995 - The K Foundation screen their film Watch the K Foundation Burn a Million Quid on August 23. On November 5 they dissolve the K Foundation.
1997 - Gimpo and Chris Brook publish the book K Foundation Burn a Million Quid.
1998 - Death of Kerry Thornley from complications from Wegner’s granulomatosis.
1999 - Death of Camden Benares. 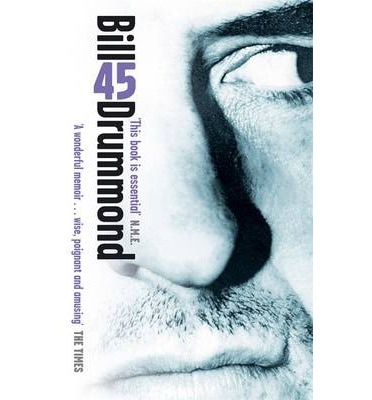 2000 - Death of Greg Hill from eosophogal cancer.
2000 - Bill Drummond releases the book 45.
2002 - Bill Drummond releases the book How to be an Artist.
2004 - Eric Wagner releases his work An Insiders Guide to Robert Anton Wilson through New Falcon.
2006 - To much wailing and gnashing of teeth, Ronin Press releases a copyrighted edit of the Principia Discordia entitled Discordia - Hail the Goddess of Chaos and Confusion.
2006 - John Higgs releases his book I Have America Surrounded: The Life of Timothy Leary.
2006 - In what at first seems the discovery of the lifetime, Karl Musser accesses Discordian materials from the JFK archives following a tip from Jon Swabey. These become available to the public, and are eventually published by St. Syn as the Wholly First Edition, along with other assorted materials. In a twist, it is eventually revealed that these pages are partial duplications of a portion of the long lost first edition only.
2007 - St Syn's Syntaclypse Generator releases the 'Snake cover' hardcopy of the Principia Discordia.
2008 - Bill Drummond releases the book 17.
2009 - Bob Newport [Brother Hypocrates Magoun] passes on his collection ofGreg Hill's Discordian archives to Adam Gorightly.

2011 - Michael Coveny releases the book Ken Campbell: The Great Caper.
2012 - Bill Drummond releases the book 100.
2012 - John Higgs self-publishes The KLF: Chaos, Magic, and the Band Who Burned a Million Pounds. Only a year later and...
2013 - ... It is picked up and published by imprint Phoenix. At his publisher's behest he seeks out photographs for the book, putting him in contact with Daisy Eris Campbell.
2013 - I travel around the world meeting Discordians for a book project entitled Chasing Eris.
2014 - Nov 23, Daisy Eris Campbell premiers her play Cosmic Trigger, based on the Robert Anton Wilson book of the same name.
2014 - With a cover by Early Discordian Roldo, Adam Gorightly releases Historia Discordia, thereby finally making the genuine first edition Principia Discordia, and the until now presumed-fictitious Honest Book of Truth available to the public for the first time, along with other finds.
2015 - Original Discordian Camden Benares's short story Candle and Censor is made available to the public for the first time, having been discovered in the Discordian archives.
2015 - Trend forecasters K-Hole predict that Chaos Magick will be the 'next big thing'.
2016 - 22nd - 24th of July. Festival 23 is held in a South Yorkshire Woodland.
2017 - May. Performances of Daisy Eris Campbell's Cosmic Trigger in London.
2018 - I release my very silly book Chasing Eris. 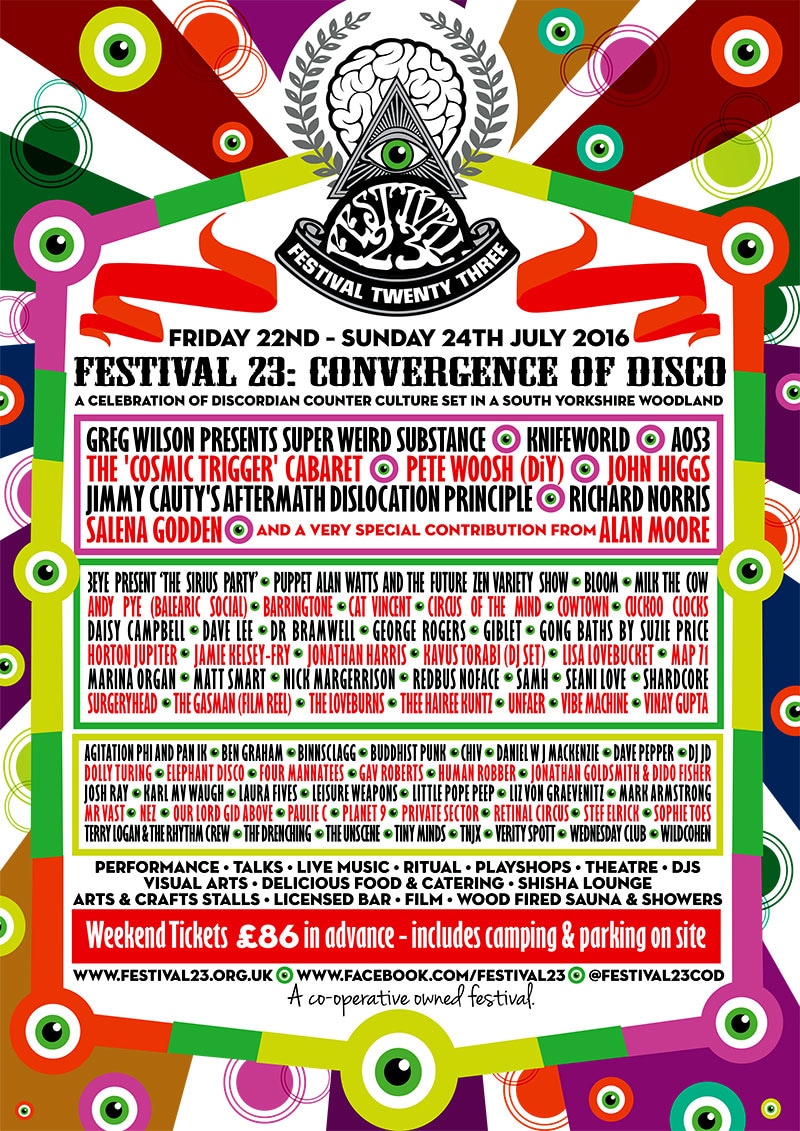